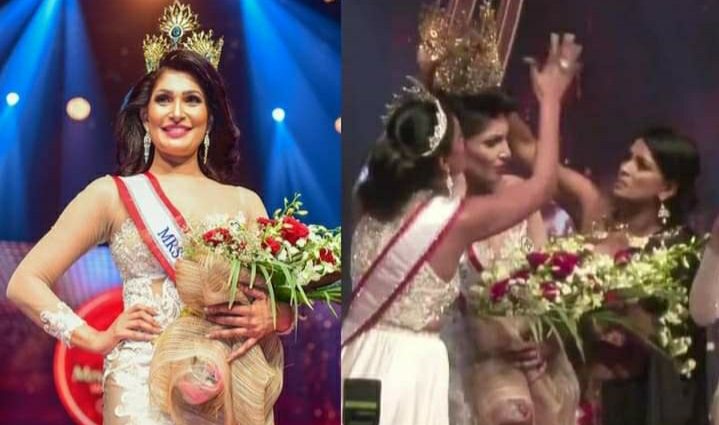 The Mrs. Sri Lanka 2021 pageant held at the Nelum Pokuna Theatre last night ended in a major brawl after the reigning Mrs. World Caroline Jurie stripped the winner off her crown after she was announced, and crowned the first runner up instead.

According to eyewitnesses, contestant number 20, Pushpika De Silva was announced as Mrs. Sri Lanka 2021 and was crowned by Prime Minister Mahinda Rajapaksa’s wife, Shiranthi Rajapaksa, Mayor Rosy Senanayake and Chandimal Jayasinghe, but when the winner was about to take her victory walk, Caroline Jurie had stormed on stage and said there was a rule that divorcees could not be crowned as winners.

She charged that Pushpika De Silva was a divorcee and hence was ineligible to win the crown. Jurie was then seen charging towards her and removing the crown despite some protests from the winner.

After the crown was removed, Jurie was seen placing it on the first runner up’s head while the initial winner angrily stormed off stage.

A massive brawl later erupted back stage as caught by camera.

Jurie and the organizers came under heavy criticism on social media, claiming that they should have known the background details of the contestants before enrolling them for events. Many even blamed Jurie for acting in an adhoc manner to make it a public spectacle and humiliating a contestant in such a manner.